This post was originally published in June 2020, in the limited print magazine OFF centre, created in collaboration with Linda Hammarstrand and Viktorija Bernatavičiūtė.

/kwir/
adjective
1. Strange; odd.
2. Denoting or relating to a sexual or gender identity that does not
correspond to established ideas of sexuality and gender, especially
heterosexual norms.
3. Off-center

The 1980s was marked as a tragic one, due to the significance of the Human Immunodeficiency Virus (HIV) and the accompanying illness, Acquired Immune Deficiency Syndrome (AIDS). The first cases and deaths of this disease were identified in members of the gay community, in the United States, which presented an opportunity for homophobia and bigotry to associate the two and call it “the gay cancer”. An utter lack of response by the government only exacerbated the crisis and made it imperative for a number of community organizations to rise up to the challenge and change the narrative for the
queer community.

One of these organizations was the AIDS Coalition to Unleash Power, also known as ACT UP, who decided to confront this challenge head-on and came up with the Silence = Death tag-line.
Their posters, printed in English and Spanish, featured the infamous pink triangle once used by the Nazis to identify homosexuals in concentration camps and turned it upside down, taking a known symbol of shame and discrimination and reclaiming it to represent a fight for survival.

This ACT UP campaign managed to inspire queer people to speak out about both their sexuality and about HIV, and by acknowledging the stigma they made great strides towards helping others in overcoming it. 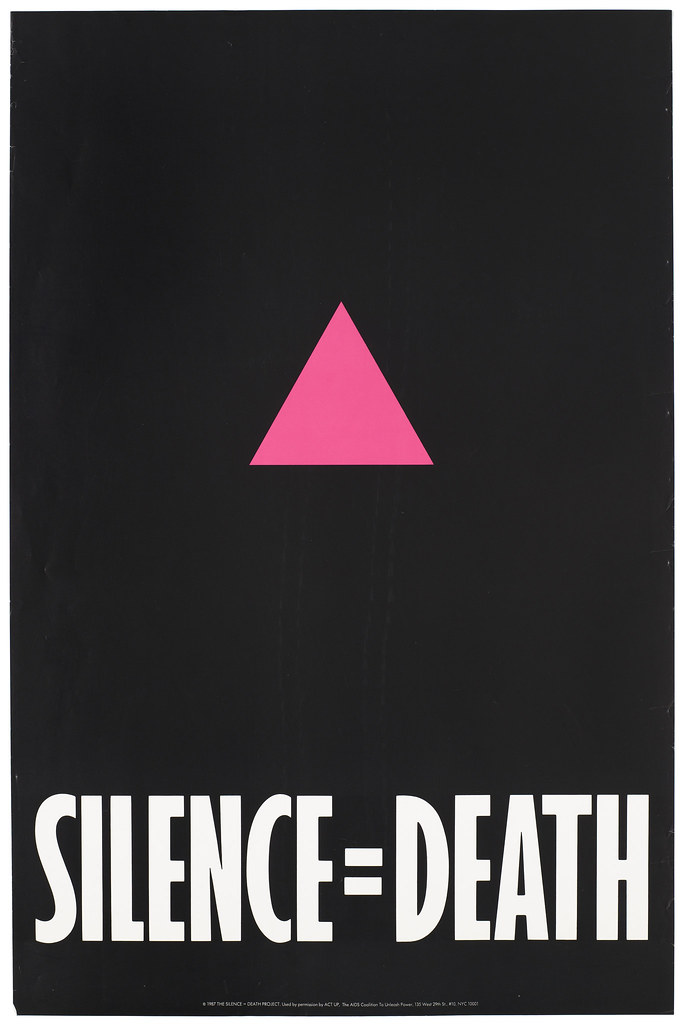 “A pink triangle against a black backdrop with the words ‘Silence=Death’ representing an advertisement for The Silence = Death Project used by permission by ACT-UP, The AIDS Coalition To Unleash Power. Wellcome L0052822” by Fæ is licensed under CC BY-NC-ND 2.0

Throughout the decade of the 80s much of the LGBTQ activism centered around the AIDS crisis.
Campaigns like the “Day Without Art”, when works of art in museums and would be covered as
a way to memorialize the loss of so many visual artists to the AIDS crisis were very powerful. Nonetheless, significant efforts were also being made in other fields. The fight for the inclusion
of people of color into the queer community, the fight for legal rights for people of all orientations,
and protests against bigoted law proposals and campaigns were taking place all over the world.

The “National Coming Out day”, was an initiative based on the premise that if enough people came out to their friends and family, significant changes in society could be seen. The evolution of the internet and the personal computer had a significant impact in LGBTQ community and identity building and design. The hand made feeling of visual pieces was slowly replaced by word made using professional software and digital pieces could be disseminated throughout the community, bringing people together
around similar icons and symbols.

If the 80s were marked by tragedy then the 90s and the entrance to the 21st century are famous for being a time of visibility for the queer community and a moment when the fight moved from the legal and political arena to the cultural one. It was a quest for visibility and representation, in the media and popular culture and with the help of popular figures like Ellen DeGeneres, the queer community and
their identity hit the mainstream.

It was during this era that some of the most marginalized and invisible factions of the LGBTQ community got their moment of exposure, including the development of symbols to represent bisexual and transsexual identities.

The biangles were designed by Liz Nania the co-organizer of the first national bisexual contingent and they instantly became re a powerful expression of the cleverness of LGBTQ design. They became the foundation for a striped flag, using the same colors, created by Michael Page.
The Transgender Pride Flag was created by Monica Helms and the pattern reflects the traditional gender colors to represent gender identities and laid out in a way that no matter which way you fly it is always correct, a powerful expression of the trans identity and a form of social awareness.
The journey into the world of queer design is a contrast of light and darkness, of struggle and enjoyment and of wins and defeats and new barriers to be overcome. Andy Campbell with his Queer X Design book brings the reader into this beautiful world we have just had a small taste of. The book is available in print and digital and format and it’s a highly curated and carefully commented compendium worth the time of anyone who feels a little queer or off-center.

“You don’t have to be a trained artist or designer to make LGBTQ culture.
This is the foundation on which our culture is built, it’s not built upon people who go to school to become designers. We make design because there’s a need, because no one else is speaking to our community and we can most effectively speak to our own community.”

Some more of my thoughts.

Queer by Design: Pre-liberation & the 70s

This post was originally published in June 2020, in the limited print magazine OFF centre, created in collaboration with Linda Hammarstrand and Viktorija Bernatavičiūtė. Queer /kwir/ adjective 1. Strange; odd. 2. Denoting or relating to a sexual or gender identity...

END_OF_DOCUMENT_TOKEN_TO_BE_REPLACED

Queer by Design: The rainbow flag

This post was originally published in June 2020, in the limited print magazine OFF centre, created in collaboration with Linda Hammarstrand and Viktorija Bernatavičiūtė. Queer /kwir/ adjective 1. Strange; odd. 2. Denoting or relating to a sexual or gender identity...